I haven’t had the privilege of meeting this Bride in person but after discussing this blog with her, I can tell she is the sweetest! I asked her a few questions about her and Morgan and I am in love with their story.

How did Makayla and Morgan meet?

This love story began on Facebook. Morgan, from Lebanon, PA and Makayla from Portales, NM originally became friends on social media through mutual friends. Morgan graduated from Eastern New Mexico with a degree in Criminal justice and Makayla graduated from Clovis Community College with a nursing degree. After chatting on Facebook, the two decided to go on a blind date to Chili’s. They instantly connected and spent nearly 4 hours getting to know each other. Morgan and Makayla dated for a little over 3 years before he popped the question.

How did Morgan propose?

Makayla’s story of the proposal is just perfect.

“For about 2 months we had family pictures with his family planned and my friend, Alli, who is a photographer was going to take them. After taking several family photos at our first location and discussing where our next location will be, Morgan and I jumped in the car with Alli who looks at the both of us and says, “Okay, I have a surprise for the both of you.” She pulls out two blind folds and tells us to put them on. Little did I know, I was the only one who put the blind fold on. Alli starts driving around and I’m sitting there saying over and over again, “Morgan, what could it be?! Where are we going?!” He’s playing along the entire time saying he has no idea! The whole time I’m freaking out because we are supposed to meet Morgan’s family at a different location to take more family photos and here we are doing this! The car finally stops and Alli opens our door and helps me out of the car. She guides me a few steps and says, “okay, you guys can undo your blind folds!” To a VERY BIG surprise, Morgan was not by my side blind folded, but instead on one knee with all our family and friends behind him holding signs and balloons that said, “Marry Him.” It was the most perfect day ever! I was completely caught off guard!”

What is one of your favorite memories from you wedding day?

“Our favorite memory from the wedding was getting to spend that entire day with our friends and family getting ready and finally soaking in the reality and the fact we were getting married! Walking down the aisle was so surreal getting to see Morgan standing there at the alter. It was a beautiful day!”

We absolutely adore this couple and wish them a lifetime of happiness together! 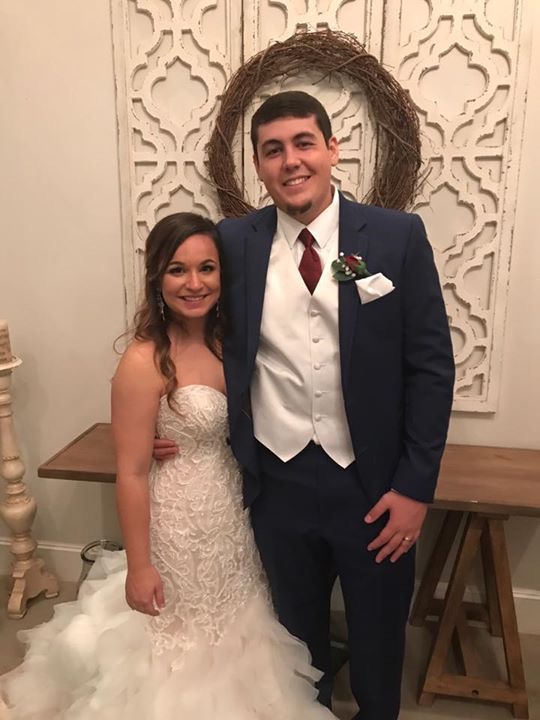